All Is Quiet At The Ancient Theatre 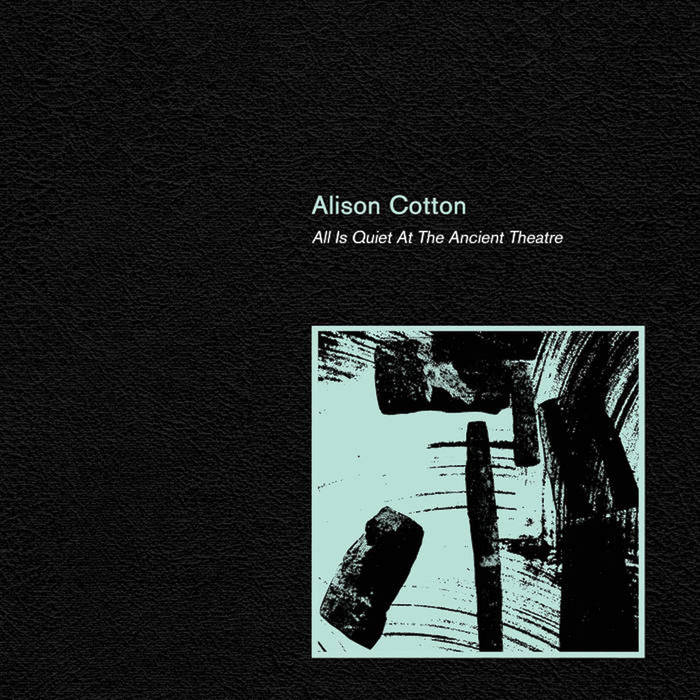 Odile A. O. Strik / Evening of Light I’m all about folk drones, and Alison Cotton delivers in spades on her latest album All Is Quiet At The Ancient Theatre. Strings, harmonium, vocals, all minimal, slowly moving. ‘The Bells of St. Agnes’ delves into some proper ceremonious balladry for a moment, but most of the album is calm meditation and gentle timbre shifts. Favorite track: A Tragedy in The Tithe Barn.

Vinylization of the second cassette released by UK string player Alison Cotton. We first ran into Alison's work in its more overtly folky guise, as a member of Left Outsides (FTR342, FTR404). Then we caught the scent of an amazing tape she did with Michael Tanner (aka Plinth) that displayed her more avant garde leanings. All Is Quiet followed the same lines, albeit in solo fashion, blending long dark viola and harmonium lines with vocals drawn straight from the clouds.

The effect resembles Tony Conard in places and John Cale's work with Nico in others, while remaining trademark Alison Cotton throughout. And as nice as the tape was, it's even nicer to has this music on an LP, since it's an archival format and will outlive all of us if properly cared for. Just as the music of Alison Cotton feels as though it was designed to last through the ages.

Originally released as a cassette on Bloxham Tapes bloxhamtapes.bandcamp.com/album/all-is-quiet-at-the-ancient-theatre

All compositions by Alison Cotton, 2018

THE QUIETUS ALBUMS OF THE YEAR (NUMBER 49) -
Alison Cotton’s album is a highly memorable suite evoking other times and places with a deftness and a lightness of touch. She is an excellent and restrained songwriter, confidently combining instrumental and vocal music to create a recording that delivers much and promises more to come. TOM BOLTON

THE GUARDIAN FOLK ALBUMS OF THE MONTH -
"An eerie, lost folk horror soundtrack glinting in the sunshine, Cotton’s pure English voice rising mysteriously around the violas and recorders." JUDE ROGERS

"Although this is music feels irrevocably for the countryside, I'd really recommend listening to 'All Is Quiet At The Ancient Theatre' on your Walkman while standing in the middle of a busy city centre. The power of this music is simply awe-inspiring. When Alison Cotton plays, the world stands still… Magnificent work, and it must be said, beautifully presented by the fantastic Bloxham Tapes (their entire back catalogue comes highly recommended)…" TRISTAN BATH, THE QUIETUS

"Alison Cotton of avant folk duo The Left Outsides creates a psychedelic pagan folk ritual with her viola, recorder, percussion and ghostly voice on 'All Is Quiet At The Ancient Theatre'. Slowing things down to a droning pace, Cotton seems to summon up mystical powers through her eerie Clannad-ish chants on 'The Bells of St Agnes'. And like Laura Cannell, she finds similar tones of drone within her string music by allowing space for the dragged out notes to echo and buzz on 'The Last Sense To Leave Us'. Her choral vocal pipes in with a numbing effect, floating upfront and back into the shadows again on the five tracks, which were all improvised… Better than any mindfulness app for cleansing the brainwaves and stilling the souls of the godless for hald an hour or so…" CLAIRE SAWERS, THE WIRE

"The opening, title track is built around a repeated, six-note viola phrase that seems to echo around an amphitheatre of stone. Heat haze rises from empty seats, but the music is playing from a time when the theatre was packed. A drone builds and the falling phrase emerges haltingly, as though calling out for the first time in centuries. As the viola sings, a chorus of soft, layered voices, percussion and recorder swells in the background and soon a cast is on stage, performing a forgotten ritual. If any piece of music can awaken a lost time, this is surely it." TOM BOLTON, THE QUIETUS

“These five sombre meditations feel still and timeless; austerely melancholy, and haunted by ghosts that will linger long after the final note has faded” SHINDIG! MAGAZINE

"Perhaps it might be better to say that Cotton’s music finds the sacred in the pastoral, or that this roots the avant-garde in the traditional. It is, perhaps, apt that Cotton’s titles reference so many spaces: this is work that’s established its own ground on which to dwell, to expand, and to quietly inspire" TOBIAS CARROLL, DUSTED MAGAZINE.

"Make no mistake this is a work of great depth and passion and one which reveals more of its irresistibly melancholic charm with each successive listen. From those chilly fields at dawn to the blasted heaths of existence and all points above and below ground this engulfs you like a creeping vine. Thankfully I’m still hopelessly lost in the dense and tangled thicket of sound and likely to be for quite a while. Rustle among yourselves." TERRASCOPE

"A sometimes distinctly mournful, often attractively melancholic aura of antiquary ritual pervades Alison’s music. It follows, therefore, that this disc is well named, for its sense of stillness and ancientry is both powerful and all-embracing – helped greatly by the mystical reverberance/s of the recording – and the listener is inspired and encouraged into a state of close attentiveness, for this is eternal, irresistible and stimulating music that provides ever-increasing reward on successive replay". DAVID KIDMAN, FOLK RADIO

"An astounding work, primarily strings and vocals in the service of British folk music, both abstracted and realized, across a series of mournful vignettes slow, deliberate, and resolute" DOUG MOSUROCK, HEATHEN DISCO

"Alison Cotton’s haunting and lovely All Is Quiet At The Ancient Theatre blends early music modalities with modern minimalism (a la Tony Conrad and the original Dream Syndicate), creating a thoroughly absorbing listening experience. Droning violas, minor key melodies, (mostly) wordless vocals … It’s definitely similar to the otherworldly sounds that Nico and John Cale made on The Marble Index and Desertshore – always a good thing in my book. Music made for flickering candlelight, shadowy cathedrals and esoteric rituals …"TYLER WILCOX, DOOM & GLOOM FROM THE TOMB

”This is a work that is surely destined to be an enduring, timeless classic”.
KENT WHIRLOW, TERRASCOPAEDIA

"The only thing that does a better job of crafting a vivid environment than the title of Alison Cotton’s new album is the music itself. 'All Is Quiet at the Ancient Theatre' is a mysterious, spacious album; one of the first things I noticed is the cavernous, reverb-filled production, which frames the sounds throughout in much the same way as I imagine a high-ceilinged, shadowy, dusty chapel would. Cotton’s drones, played on viola, recorder, and her own voice, ring out through the darkness, coexisting with the weighty silence as they materialize and dissipate… 'All Is Quiet at the Ancient Theatre' is a fantastic solo effort…" NOISE NOT MUSIC

"Something so beautiful and powerful that it took my breath away… With this solo outing via the veritable Bloxham Tapes, Alison Cotton has produced something that transcends any notions of genres and pigeonholing." RATS IN THE WALLS

"Cotton is an artist of profound talent and her mastery of her chosen instrument deeply impressive. All Is Quiet At The Ancient Theatre is consequently an album to stand proudly in any collection". [SIC] MAGAZINE

”This is a work that is surely destined to be an enduring, timeless classic”. TERRASCOPAEDIA

"An astounding work, primarily strings and vocals in the service of British folk music, both abstracted and realized, across a series of mournful vignettes slow, deliberate, and resolute". HEATHEN DISCO

"Alison Cotton’s haunting and lovely All Is Quiet At The Ancient Theatre blends early music modalities with modern minimalism (a la Tony Conrad and the original Dream Syndicate), creating a thoroughly absorbing listening experience. Music made for flickering candlelight, shadowy cathedrals and esoteric rituals …"DOOM & GLOOM FROM THE TOMB

Bandcamp Daily  your guide to the world of Bandcamp