There is a Place

by The Left Outsides 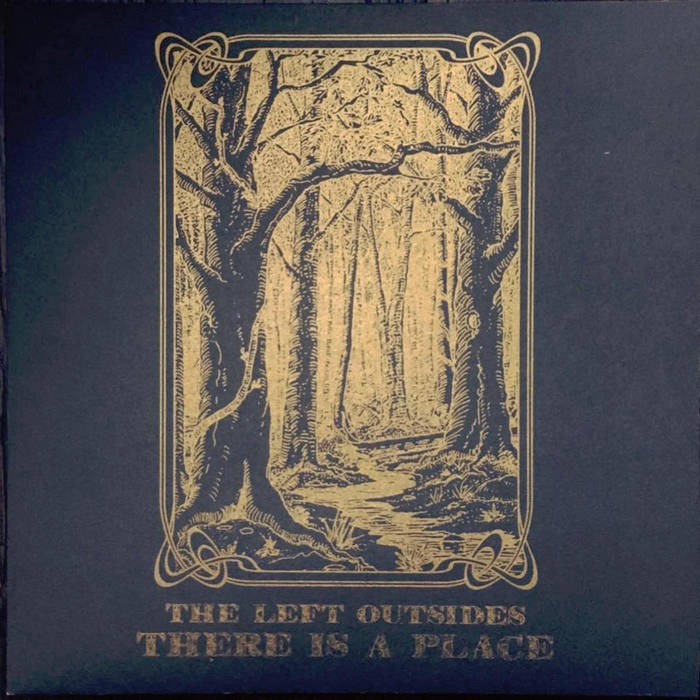 brit_b My favorite of their albums. It includes dreamy instrumentals immersed in classical violin to fairly straight ahead rockers. It all works amazingly well. Favorite track: Under Noonday Sun.

Tim periwinkle just plain beautiful. the power of voice and song.All the sounds we love ,in time,and of themselves.

Deadpixie So, pleased to have a copy of this album. The Eighteenth Day of May have left a superb legacy.

Is Life Always This Hard

The Left Outsides, Mark Nicholas and Alison Cotton, are a husband and wife duo based in London, England whose atmospheric, hypnotic songs echo Nico’s icy European folk, pastoral psychedelia and chilly English fields at dawn. 'There Is A Place' takes its inspiration from the forest, with the LP made up of new compositions as well as reworked recordings the band wrote and performed for Gus Alvarez's film, Stand & Deliver. "In a woodland clearing lies the body of a young woman. A sharp intake of breath - she is alive. What happened last night? Into the woods she searches for answers"...

The Quietus
(Included in the Writers Favourite Albums of the Month - October)
"The Left Outsides specialise in unearthly evocations of woodland at the disturbing hour when daylight clings onto just a few more moments of life. Under this coherent aesthetic and atmospheric whole, The Left Outsides manage to bring together an impressively diverse sonic palette.....The resigned fuzz of ‘One Step At A Time’ sounds like the Mary Chain wandering slowly into a suicide pool, somewhere lost in the gloaming. Opener ‘Cry Of The Hunter’ and ‘Time Makes A Fool Of Us All’’s abstract field recordings and arrhythmic sounds underneath airy chanting resemble an organic take on Richard Skelton and Autumn Richardson’s landscape explorations. ‘Under Noonday Sun’, on the other hand, is classic psych pop tripping balls through a sunlit glade, wondering which planet the grazing cows come from."
- Luke Turner

Record Collector
4*
"The Left Outsides...merge dissonant, ritualistic drone with the narcotic fun of shoegaze and the bucolic swoon of folk rock - and that's just the first three tracks of their excellent new album. These may be the main strains of their sound but The Left Outsides are at their best when collapsing these distinctions. ‘Time Makes A Fool Of Us All’ is a long-form atmospheric piece that sounds like Coil re-imagining Shirley Collins’ version of ‘Plains Of Waterloo’ with wordless vocals interrupted by abrupt, percussive detonations and searing electric guitar".
Alex Neilson

Prog Magazine
"As we are now fully entrenched in autumn, the arrival of this album seems particularly apt as it captures so well the mood of the season. The opening_Cry Of The Hunter_ is sombre and enigmatic. Ominous piano chords underpin Cotton’s violin lines, which hang like mist in a clearing, along with her wordless vocals. With Nicholas’ breathy tones and slow distorted guitar chords, One Step At A Time sounds rather like a decelerated shoegaze song. And the brief Into The Deep with Cotton singing, draws comparison with Beach House and Low, but it feels closer in style to the crepuscular moods of Mazzy Star with a dash of gnarly old English folk. Under Noonday Sun, with bass and drums is upbeat, almost poppy, like an updated outtake from the first Fairport album. But the album’s mood is summed up by the closing The Creeping Fo_g, with over-echoed feedback guitar and resiny violin, and Cotton singing, ‘_As night draws near, a lamp I light/The frozen fields ahead of me.’"
Mike Barnes

Folk Radio
"There Is A Place is a really clever achievement. Virtually every track sounds different, yet together they form a sequence of enviable, unexpected and yet almost disembodied unity. Am I making sense? Probably not – for you really have got to get immersed in The Left Outsides’ music. It’s a truly sumptuous listening experience, totally engrossing from the first note, and each separate track refuses to let your ears go"
David Kidman

Shindig! Magazine
4*
This album successfully marries the bleary narcotic dream-pop ethic of Grouper and Beach House (check out the truly stunning 'One Step At A Time') with the more familiar drone-folk / pastoral excursions, most of which ('Time Makes A Fool Of Us All', 'The Creeping Fog') play out like some weird Anglo-Gothic film soundtrack, but are kept in balance by a gorgeous and inspired reading of Jack Frost's 'Civil War Lament'.
Johnnie Johnstone

Textura Magazine (Canada)
"The brooding instrumental 'Cry of the Hunter' eases the listener in on a dramatic note with mournful expressions of strings, guitar, and wordless vocalizing punctuated by piano chords, the piece resembling at times a meditative King Crimson improv from the early ‘70s"........
textura.org/archives/l/leftoutsides_thereplace.htm

Terrascope
"The lush but all too brief ‘Into The Deep’ persists with the shadowy subject matter, before the shards of guitar, mournful sawing and cavernous, wordless vocals on ‘Time Makes A Fool Of Us All’ (a sentiment I’m constantly reminded of these days) provides a genuinely transcendent moment. If this doesn’t make the hairs on your arms stand up then please accept my congratulations on an exfoliation job overdone. You’ll be jolted back into the room (or wherever takes your listening pleasure) courtesy of the sharply anachronistic ‘odd chapter’ here, characterised by the exquisite, sixties-style psych pop harmonies of ‘Under Noonday Sun’. By contrast, ‘The House Of The Stone Bell’ (you’d be forgiven for thinking it was the eponymous track as the album title crops up a few times in the lyrics) exudes an achingly wistful longing and an arrangement and melody to cry for".
Ian Fraser
www.terrascope.co.uk/Reviews/Reviews_July_17.htm#LeftOutsides

Echoes And Dust
"Their music has the ability to cause a displacement in your mind as a haunting otherness seeps through. It’s European but essentially old English folk, giving a curious mismatch of ideas. That they can pull this together in such rapturous beauty as on their previous release, The Shape Of Things To Come is all the more remarkable."
Martin Coppack
echoesanddust.com/2017/07/the-left-outsides-there-is-a-place/

Days of Purple and Orange
"Opener 'Cry Of The Hunter' is the aural equivalent of The Wicker Man - haunting drones and ethereal vocals that convey the superstitious folklore of the English countryside.....The album as a whole is gorgeous....rich drones, thoughtful lyrics and the vocals, both Mark and Alison, are sumptuous. It is a lysergically charged bucolic delight!"

Bandcamp Daily  your guide to the world of Bandcamp